Головна Сторінка » The war in Ukraine. Two nations are fighting, but the whole world will feel the aftermath

The war in Ukraine. Two nations are fighting, but the whole world will feel the aftermath

The Russian war with Ukraine has been going on for the second month now. The hostilities spread over ten country regions, accounting for about 50% of the GDP, and the estimated damage is already 565 billion USD. At the same time, we are witnessing an unprecedented world reaction to such aggression. On the 12th day of the war, the Russian Federation pinnacled the anti-rating of sanctioned countries, surpassing such notorious regimes as Iran, Syria, and North Korea.

Now Ukraine is on the international agenda. However, this is not the first modern history war involving the Russian Federation. There were already Georgia and Moldova, Ukrainian Donbas and Crimea, and the conflict in Syria is still going on. So why is the world so actively involved now? Of course, primarily because of the magnitude of the aggression. But at the same time, we all understand that the aftermath of this war will not be limited to its immediate participants but will impact the rest of the world.

The famine is coming?

Warfare in Ukraine jeopardizes the sowing campaign. We can already witness a 39% loss of spring crops acreage and a 28% reduction in winter crops acreage. Moreover, the absence of fighting does not necessarily protect against airstrikes, as the aggressor’s missiles may hit sown land at any time.

Therefore, a legitimate question arises: may famine be added to casualties and destruction of civilian infrastructure?

The Ministry of Agrarian Policy and Food of Ukraine has already reassured us that Ukraine is not threatened by famine, as the country has enough food stocks to satisfy any domestic demand. For example, stocks of corn are enough for two years, sunflower oil for five years, and sugar for 1.5 years. There is a slight wheat deficit, but it can be closed by the winter crops harvest next summer.

Stocks of food products in Ukraine

The Ministry of Agrarian Policy and Food of Ukraine

But can we say the same about countries depending on Ukrainian exports? Ukraine feeds 400 million people around the world. Our country is a world-leading exporter of sunflower oil. Also, Ukraine is one of the top 3 world exporters of barley, rapeseed, sorghum, and rye.

Ukrainian exports of some food products

Although these figures do not look that significant compared with global consumption, exports are first and foremost about geography. It is crucial, especially with essential goods, to have reliable logistics for their delivery. Importing from the other end of the world means additional time and financial expenditures. Maintaining the existing supply chain geography, especially for countries with a high dependence on food imports, becomes vital.

World consumption of some food products

With the outbreak of hostilities, the Ukrainian government decided to ban the export of key agricultural products to ensure national food security. The Russian Federation also restricted exports in response to the imposed sanctions. These factors will have a rather painful effect on the countries importing agricultural products.

The primary consumers of Ukrainian wheat are the Middle East and North African countries. For them, the import from Ukraine is the cornerstone of food security. It is not only about goods themselves but also about logistics and product prices.

Logistic chains disrupt. Shipments via Black Sea ports stopped, exporters now have to use ground logistics, but its throughput capacity is many times lower than maritime one, and these flows are mainly aimed at European countries, making the Middle East and Africa shipments too expensive.

Dependence on wheat imports from Ukraine, 2021 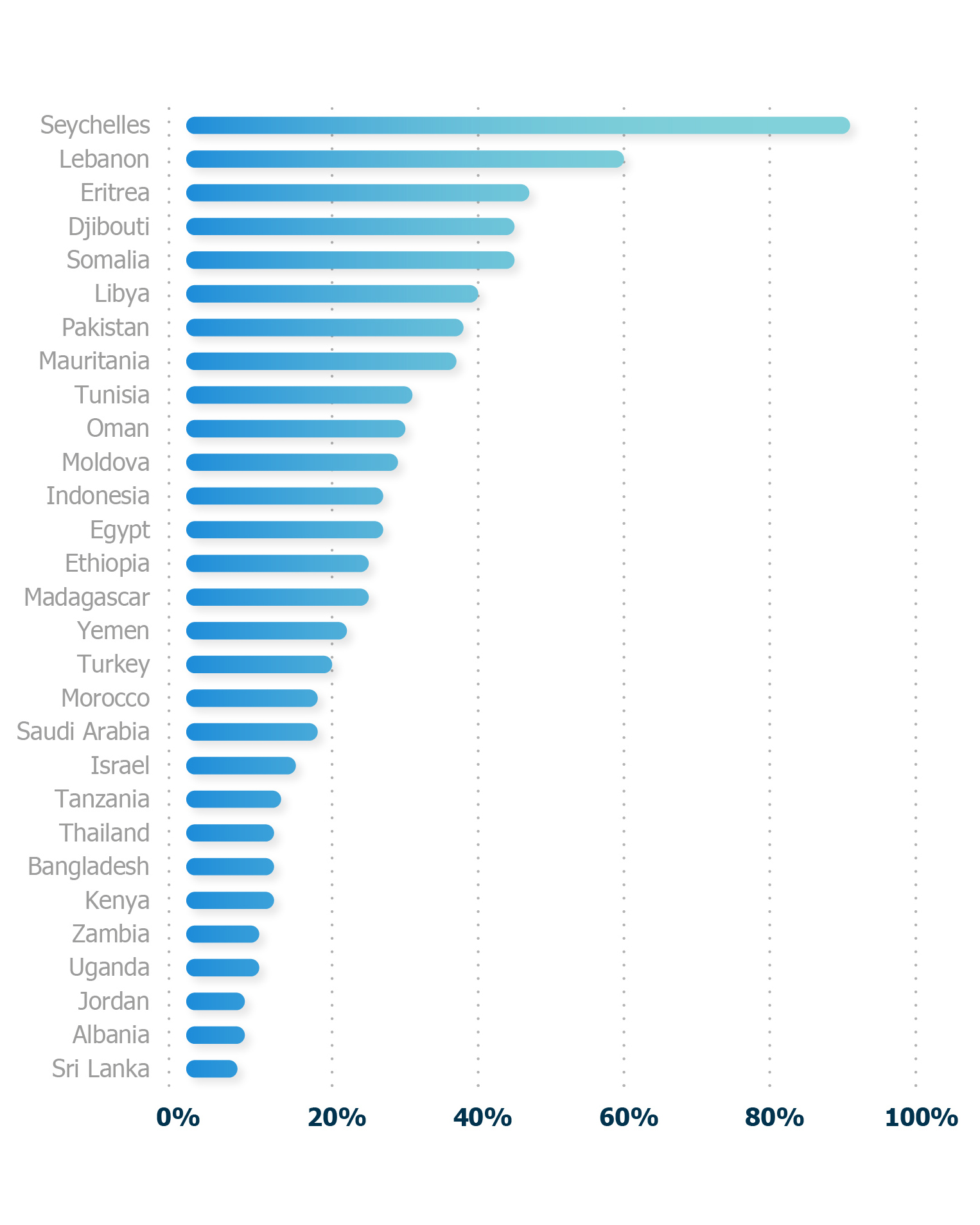 Food and Agriculture Organization of the United Nations

In addition, the suspension of key players in the global agricultural market and reduction of supply is likely to increase prices. World wheat prices have already soared by 19.7%. According to the Food and Agriculture Organization of the United Nations, the war may result in a 22% jump in feed and food prices.

The limited supply and skyrocketing prices will result in starvation in developing countries across Asia and Africa.

According to FAO estimates, about 45 million people worldwide are already on the brink of starvation, and the war in Ukraine will add 8–13 million people to this indicator.

Hospitable Europe. Will it last?

The war has forcibly displaced many Ukrainians from their homes. Many have lost them indeed, causing them to move to relatively safe regions of the country or leave Ukraine altogether. The United Nations estimates that 6.5 million Ukrainians became internally displaced, while more than 4 million left the country.

The whole situation creates a significant financial burden for the European Union countries. According to calculations of ING, financial support of refugees during the year can cost Poland up to 1,5% of GDP, provided that their number will not increase. Goldman Sachs estimates that the four largest EU countries will spend 0.2% of GDP to provide for the Ukrainian refugees (again, if their current number remains the same), while their budgets deficit will increase by 1.1% of GDP.

In addition, the large inflow of refugees has already affected the inflation rate in the European Union. The figure hit a record 7.5% for Europe in March, while the European Central Bank had planned it as 2%. Another factor behind the surging inflation was the mutual restrictions on trade operations between the European Union and the Russian Federation. In addition, a gradual rejection of Russian energy will also contribute to the rise in prices as its cost from alternative suppliers is usually higher.

If the war in Ukraine prolongs, the number of refugees will continue to grow, which will hurt the economy of the European Union, which, in turn, will not be able to accommodate Ukrainians at the level that we are currently witnessing.

Despite the ongoing war, Ukraine is sowing crops in all possible regions, even in Kherson and Mykolaiv regions, which are very close to the hostilities. The Ministry of Agrarian Policy and Food of Ukraine claims that Ukrainian farmers are provided with all the necessary materials for the sowing campaign, including the diesel, which price significantly grew. Thus, the key barrier to the food security of the countries importing Ukrainian agricultural products will be the physical impossibility of their export and not a decrease in their output, primarily due to the suspension of exports through the ports in the Black and Azov Seas, which are the critical link in the agricultural logistics of Ukraine.

79% of the Ukrainian refugees plan to return to Ukraine after the end of the war, as demonstrated by a border checkpoints survey conducted by the Razumkov Center between March 15 and April 1. Moreover, many refugees are already returning home without waiting for the end of hostilities nationwide. Thus, an acute labor shortage also does not threaten Ukraine.

At the same time, the world should not forget that Ukraine is an essential component of global economic stability. The food crisis in the developing countries of Asia and Africa entails several new problems. First of all, the number of refugees will increase since it is naive to think that people will meekly sit and wait for a starving death in case of a food shortage. Many will try to leave for other countries, primarily Western ones, looking for a better life. In such a case, Europe will face a migration crisis similar to one already experienced in 2015. And given the fact that they have already welcomed a vast number of Ukrainians, the influx of Third Worlders will further put an even more significant financial burden on these countries.

In addition, the food crisis in these countries may cause mass riots, increased crime, and looting that will require the intervention of Western countries to solve these problems.

Ukraine is one of the most significant players globally, and many other countries depend on its well-being. Our country wants to return to normal as soon as possible, and now more than ever, it desperately needs the support of other nations, both militarily and economically.

Check out other expert materials from Kreston Ukraine

Integrated and printed circuits are used in any electronics, from small appliances to heavy equipment...

The war with the Russian Federation has been going on in Ukraine for three months...

On May 25, Mykhailo Fedorov, Minister of Digital Transformation of Ukraine, shared a broad perspective...

The war in Ukraine is destroying absolutely everything in its path. Business also became its...

The Russian war with Ukraine has been going on for the second month now. The...

We are convinced that in any struggle, the winner is not the one who has...

Modern warfare requires not only the fighters on the frontlines who resist the Russian aggression...

As the war in Ukraine enters its seventh week, it has been repeatedly observed that...

Volunteering is an effective and important way to help Ukraine to fight the enemy. Since...

Among Kreston Ukraine employees are those who dedicate their time to the medical needs of...

Today is the 40th day of Ukraine’s desperate struggle for its integrity and independence. Our...

War always divides life into “before” and “after”. Many of us, who were minding our...

On March 15, the Verkhovna Rada supported as a basis and in general the Law...

In recent days, the topic of the special tax regime of Diia.City has become perhaps...

On February 7, Kreston Ukraine signed a memorandum of cooperation with the Ministry of Digital...

In a global economy where multinational enterprises (MNEs) play a prominent role, governments need to...

The Ukrainian Venture Capital and Private Equity Association (UVCA) and the audit and consulting company...

One of the largest financial forums is taking place in Kyiv – the XX Anniversary...

The KRESTON team expresses its respect and apologizes in advance for the fact that you...

On September 30, the Economic Faculty of Taras Shevchenko National University of Kyiv hosted an...

Copyright © 2022 LLC "Kreston Ukraine". All rights reserved. Kreston Ukraine LLC operates under the Kreston brand and is a member of the Kreston Global network, whose members are individual and independent legal entities.

TRUST YOUR PROJECT TO PROFESSIONALS